Cleveland Still Has Time to Get Into the Immigration Game? 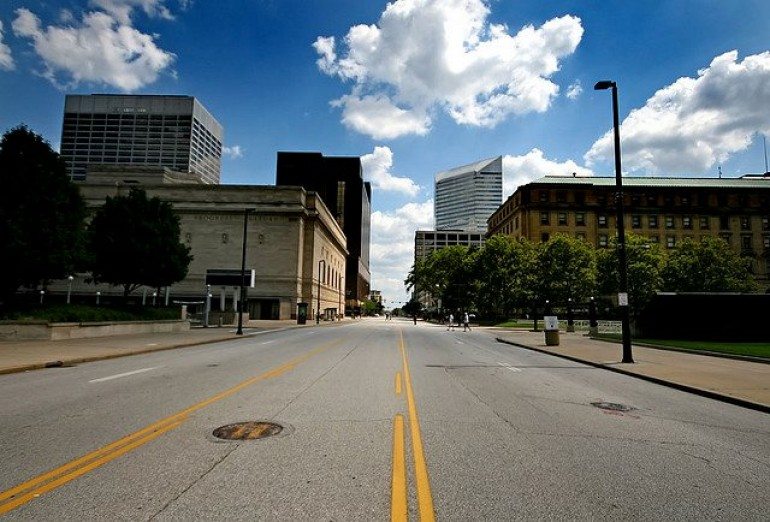 Cleveland is increasingly becoming an outlier on the issue of building globally-inclusive communities, attracting immigrants, and creating new jobs by leveraging the entrepreneurial and innovative propensities of the foreign-born.

Despite progressive depopulation, job loss, and erosion of the tax base, few in Cleveland seem to notice.

While other cities are racing forward on immigrant-inclusion strategies, immigrant-attraction initiatives, and global engagement efforts, Cleveland seems, as one renowned economist tagged us, as a “global backwater.”

Even the conversation on this topic is tentative, measured, and spoken in hushed tones.

In the book, “Caught in the Middle: The Midwest in the Age of Globalization,”Pulitzer-nominated journalist Richard Longworth formerly of the Chicago Tribune, wrote that of all the Midwest cities he visited and studied, Cleveland was the least willing or least able to discuss globalization and what it means going forward.

Huh? Wouldn’t every leader want to know how to help his/her community from being a punching bag of globalization, and instead transform it to being able to harvest the fruits of an internationally-connected economy?

One of the main bridges to leveraging globalization for local economic growth is immigration — the attraction of foreign-born talent, entrepreneurs, investors, homeowners, and consumers.

So, why is Cleveland so quiet on the immigration opportunity?

I believe this is due largely to two factors: status quo leadership not eager to usher in change; and a stunted civic dialogue that gets very little help from disengaged media struggling for survival. In this instant recycling “news” machine, well-packaged hype takes precedence over meaningful analysis. Happy thoughts are better than painful introspection

As an example of disinterested local journalism, it is hard to believe that the Plain Dealer editorial board is doing its homework when it wrote in January that Greater Cleveland made “extraordinary efforts” in moving the conversation forward on immigrant attraction as a growth opportunity for the region. http://www.cleveland.com/opinion/index.ssf/2014/01/assessing_agenda_2013_greater.html

It’s even harder to believe that they are aware of what is happening outside their windows, as they write this http://www.cleveland.com/opinion/index.ssf/2014/05/global_cleveland_wants_to_reve.html seemingly oblivious as to how nearby cities powerfully embrace immigration as an economic development opportunity, while leadership at Cleveland’s foundations, chamber of commerce, and elected offices largely reject it.

Media: Let the Fresh Air In

Perhaps the first thing the editors of the PD should consider doing, to educate themselves and their readers, is to begin re-publishing pivotal stories that are generated about this issue, seemingly weekly, from the NYTimes, WSJ, Washpost, CNN and other outlets. If for nothing else, exposure to the real issues and possibilities might raise the level of discussion in Cleveland beyond platitudes and pablum.

Even better, the PD & Cleveland.com should do their OWN series on our peer cities and how Cleveland is measuring up.

The national media consistently leaves out mention of Cleveland as it discusses the “extraordinary” innovations on the immigrant-attraction front in cities like Detroit, Dayton, St. Louis, Columbus, Pittsburgh, Cincinnati, Baltimore, Chicago, Indy, Buffalo, Syracuse, and other rust belt cities.

There is a reason for this omission. The national media see the anemic immigration policy discussion taking place in rust belt cities, aware that Cleveland is not on board. And yet, our own journalists (with welcome but rare exceptions), miss the story.

A good way to describe this is “cognitive dissonance” (a term used by Dan Moulthrop in this bell-hitting blog post: http://theciviccommons.com/blog/a-not-so-open-door-policy

In regards to Dan’s post, I had a revealing discussion with Editors at PD and Cleveland.com recently, and when I suggested that they largely missed Mayor Frank Jackson’s historic “we take care of our own” comments at the state of the city a year ago, they proudly said, no, we did cover it! I kindly pointed out to them, that yes, you did cover the story, but it took a couple of weeks AFTER the Mayor’s comments were made in front of an audience of 1,000 people, after the story broke by Dan asking in his blog, why aren’t we talking about this?” after Scene wrote their story about Dan’s blog, after the Mayor issued a press release “clarifying” his comments, that the Mayor’s comments made it into the PD: http://www.cleveland.com/tipoff/index.ssf/2013/03/cleveland_mayor_frank_jackson_2.html

Is this the level of coverage that is expected when the PD Editors claim, year after year, that the immigrant welcoming/attraction discussion is its “editorial priority”?

If the Plain Dealer editorial board is going to discuss this issue as one of their longstanding “editorial priorities,” they should have a deeper understanding of the questions involved, rather than just parroting the mantra of need to attract “high skill immigrants” or “let’s attract newcomers” with snappy pitches. (Yes, Cleveland has amenities and unfilled jobs, but so does every other major city in America. In terms of unfilled jobs— it’s a national crisis — collectively over 2 million open jobs).

The issue is much more complex than the PD Editorial Board seems to grasp, and much more nuanced than the local non-profit cartel peddles in their press releases.

The taxpayer-funded campaign of Global Cleveland should be more about attracting & welcoming immigrants. To do this, and to appeal to immigrants, “we” will have to change. The public education & awareness campaign should be focused on changing the insular hearts and minds in NEO, to help “us” understand why welcoming immigrants is in our economic self-interest, and how we should go about creating an organic culture that welcomes and attracts them.

This discussion is raging in nearby cities….. in Cleveland, it’s barely a whisper.

Isn’t the role of journalism (and civic leadership) to uncover the heart of the matter? Shouldn’t the PD be asking the question: why are peer cities running toward this issue, why Cleveland is largely running away from it?

Along with over 10 Hispanic immigrant leaders sitting alongside me recently in the PD Boardroom, I also suggested to the PD and Cleveland.com editorial leadership that they figure out, quickly, how to properly edit the racist rants of their Deputy Editor Kevin O’Brien. http://www.cleveland.com/obrien/index.ssf/2014/04/illegal_immigrants_want_money.html

Unfiltered and unencumbered by fact or research, O’Brien helps to fuel a culture of intolerance in Northeast Ohio.

I recently described this to our friends on the PD editorial board by suggesting that watching our peer cities embrace the immigrant-inclusion conversation, and comparing that to the narrative that has been ushered in Cleveland, is like watching me stand next to Arnold Schwarzenegger next to me on the beach.

The region needs the disengaged PD Editorial Board, and its business and civic leaders, to become more interested in this conversation. To ask more questions. To help lead a meaningful public discussion.

So, What Are Cleveland’s Peer Cities Doing?

Here is a recent sampling of “extraordinary efforts” in welcoming and attracting immigrants outside the CLE compound:

Also of note, cities of Pittsburgh, Detroit, Cincinnati and Dayton all have recently elected new mayors. All are launching programs to leverage the immigrant-dividend.

Bill Peduto, the new mayor of Pittsburgh, ran on a campaign of making Pittsburgh a more immigrant-friendly city. He won by a landslide. http://www.billpeduto.com/2013/02/27/84-city-of-immigrants-welcoming-a-new-generation-of-immigrants-to-pittsburgh/

The 2014 summit on immigrant-friendly cities in the rust belt will be held in Pittsburgh in June. http://globalgl.wordpress.com/

Where to go From Here?

In all the cities who are pursuing economic development initiatives focused on immigrants and immigration, leadership has emerged from at least one of these sectors: political, business or philanthropy. In Cleveland, all three sectors have declined to embrace an immigration-based strategy.

For Cleveland to move forward and join these other cities, it will have to have a tough, honest and open discussion about race, inclusion, and globalization.

A group of dedicated leaders will need to emerge to champion this issue, connecting the old guard with fresh new voices.

Until that happens, we will still be dancing in our own bubble, while the city and region continue to decline.

Herman Legal Group and Cleveland immigration lawyer will help, with all we can, to help this region train, retain and attract talents.