Dept. of Homeland Security Reports Proposed Plan to Increase Application Fees Across the Board

Yesterday, the DHS has published in the Federal Register its proposed changes to the USCIS fee schedule. In general, the plan seeks to surge application filing fees for many immigration benefits.  After examination of current fees and expenditures, acting direction of USCIS Ken Cuccinelli concluded that “current fees do not recover the full costs of providing adjudication and naturalization services, and [. . .] would leave the agency underfunded by approximately 1.3 billion per year.”

Major changes include primarily the increased fee for US citizenship. Currently at $725, applicants for citizenship can now expect to pay $1,170—roughly a 60% increase of the current filing cost.  This increase is the first time in history that naturalization will cost over $1,000.  Advocates criticize that this proposal attacks low-income, eligible immigrants who already lag behind in the process to naturalize, due to the cost barrier of the application fee.

The USCIS also plans to eliminate fee waivers for a variety of immigrant applications, US citizenship again being one of them. This proposal is significant as data reports nearly half the amount of applications for US citizenship receive a fee waiver, once again generating a financial barrier to eligible immigrants to become lawful citizens.

Aside from increased fees, there are some proposed decreased costs. Among them is the decreased rate of renewal of permanent resident green card. Currently at $455, applications for renewal will become $415. Moreover, lawful permanent residents should take note that these fee changes have been published and will be implemented prior to the upcoming election. While saving money on a visa renewal seems advantageous, advocates strongly encourage eligible green card holders rather apply soon to naturalize before fees go up, and potentially gain citizenship in time for voter registration for the 2020 November elections.

Other notable rate changes are listed below. Exhaustive list may be found on the Federal Register. 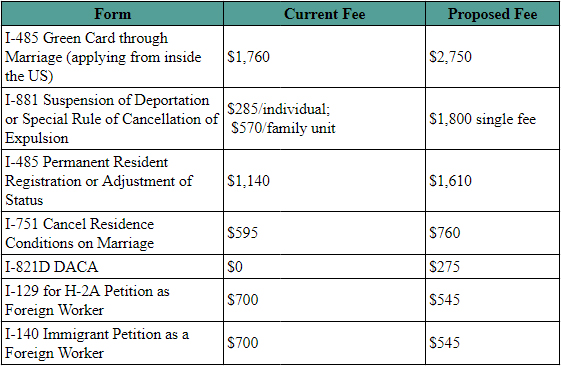 Public opinions will be received and considered by the DHS within the following 30 days. The proposal is expected to go into effect December 2, 2019.