As lawyers for the Consulate of Mexico in Detroit (with jurisdiction in Michigan and Northern Ohio), Immigration Lawyers  Richard Herman are proud to be partnering with the Consulate for an online session on Facebook and Zoom to talk about current immigration law developments.

On July 28, 2020, Noon (EST), members of the community are welcome to join the free online session.

This session will include the following topics:

There is much confusion after the recent Supreme Court decision on DACA— Deferred Action for Childhood Arrivals. The Court ruled that the method used by the Trump administration to terminate DACA was unconstitutional.

The Court did NOT rule that DACA was unconstitutional.  This ruling left the door wide open for the Trump administration to issue a brand new termination of DACA.  To date, this has not happened.  Although USCIS has issued a statement after the Supreme Court decision reiterating its position that DACA itself is unconstitutional.

The White House has sent signals that it intends to terminate DACA, again.  However, in the meantime, can individuals apply now for their first DACA?  We will discuss it!

On June 22, 2020, President Trump issued an Executive Order,= entitled “Proclamation Suspending Entry of Aliens Who Present a Risk to the U.S. Labor Market Following the Coronavirus Outbreak.”  In that Order, he temporarily suspended certain work visas, including the H-2B temporary seasonal worker visa that is often used by workers in landscaping and other seasonal worker industries.

The Order went into effect on June 24, 2020, and shall remain in effect until December 31, 2020, unless otherwise terminated by the President.

Those affected only include the following individuals who are:

(i)    Outside the United States on the effective date of this proclamation;

(ii)   Do not have a nonimmigrant visa that is valid on the effective date of this proclamation; and

(iii)  Do not have an official travel document other than a visa (such as a transportation letter, an appropriate boarding foil, or an advance parole document) that is valid on the effective date of this proclamation or issued on any date thereafter that permits him or her to travel to the United States and seek entry or admission.

Herman Legal Group $1,000 Essay Contest:  What Do You Think of When You Hear the Word “Immigrant”?

In order to raise awareness of the important contributions of undocumented essential workers, the Herman Legal Group is hosting a $1,000 essay contest.  The deadline to apply is August 1, 2020.

Submit your essay at ImmigrantStrongUSA@Gmail.com  We are seeking thoughtful and creative essays, at least 300 words, in any language, on the topic:  What do you think of when you hear the word ‘Immigrant’?

Winners will be announced by September 1, 2020.  The firm will be publishing the winning and runners-up essays.  Anonymity will be protected unless identification is authorized by the author.

More importantly, they deserve an opportunity to obtain legal status in the U.S.  In the meantime, let’s hear their voices, celebrate their accomplishments, and give thanks for their hard work.

It’s time to change the conversation! 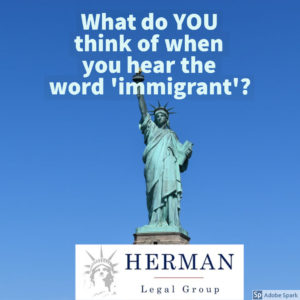